Last Friday, I was lucky enough to be able to speak about planning and developing the Demystifying Digital Humanities program at the annual meeting of the Rocky Mountain Modern Language Association. If you’d like to read an approximate version of what I said, the text is available at my own website.

Sarah and I were invited to give a talk in the UW Libraries Praxis Series yesterday, and we did, and besides an odd occurrence of Powerpoint wonkiness, we think it went very well.

Here are the slides in Quicktime.

And here they are in Powerpoint, if you prefer that.

Here are our notes for the narrative of the talk — and here’s the handout we provided.

This talk was part of our ongoing work in planning the Demystifying workshops, and is part of the major question that we’re both driven by: how to make DH less intimidating, and more transparent, so that scholars at any level can choose whether or not (or how much) they want to get involved.

If you have questions or comments, we’d love to hear them.

Whew. The first workshop (of six, total) is done. People came. Lots of people. Everything went according to plan, pretty much; so in geek parlance, “We made a thing! It didn’t suck!” It’s a nice feeling.

I feel like I’m still articulating what I’ve learned from this, so for this post, I’m going to focus on what I worried about, and what I did to deal with those worries. I’m using “I” because this is my post, and I don’t want to put words in Sarah’s mouth — but we certainly worked in concert on this.

Biggest of all were my fears that no one would come, or that only a few people would come. A previous digital humanities event had faced that issue — and I feared for the future of other DH development grants at UW; but also for the validity of Sarah’s and my theory that what the digital humanities needs (at least, on our campus) is an introduction that explicitly works to be welcoming and non-threatening. A lot of the advance work we did was in finding ways to keep people’s interest without being intimidating, or demanding that they read lots of essays — or any essays — in advance. I didn’t want anyone to think: “Oh, I haven’t done the homework, so I’m going to be behind everyone else, so why bother going?” I also didn’t want them to forget about the workshops entirely (something that seemed entirely possible, given how the quarter can get going).

So: how to start scaffolding the idea of DH as non-monolithic in a non-intimidating way that would engage our participants without asking them to do a lot of advance work? I mean, I’d have loved to give them an article from the excellent Debates in the Digital Humanities, but I know how little time I have for reading — why assume that other people had more? Taking time to actually read something carefully and slowly is a big commitment for graduate students (and recent PhDs and/or new faculty). Of course, though, to overgeneralize in service of simplifying would be just as bad.

I came up with the idea of a personality quiz (which Sarah liked). Most people have encountered them — whether in the Meyers Briggs format, or in the far less scientific “Which Harry Potter Character Are You?” style. It would allow us to distinguish some of the different types of DH work that we’d seen people doing; and allow us to prompt workshop participants towards some self-reflection about their own preferences and processes (which they may or may not have been invited to think about as important). Also: I thought it would hit the balance between informative and non-authoritative that I was really striving for. Most people are perfectly happy to say “I thought I’d be Harry, and instead I got Ron Weasley” when they post results for this sort of thing on Facebook (admittedly, the personality quiz meme peaked a couple of years ago, at least).

Coming up with the profiles was easy, compared to writing the quiz itself, which I did using SelectSmart’s free setting. It’s littered with ads, but the quiz mechanism itself was simple enough. With some thought, so was writing the potential questions, and their answers. The hard part was actually mapping the answers to the different profile types, which required me to say whether a particular profile, i.e., the Workflow Expert, would always, usually, sometimes, rarely, or never select a given answer. I do hate thinking in stereotypes, but if I refused to do so, the quiz would be nonfunctional for our purposes. “Congratulations! You are a perfect match to all 12 profiles!” I also didn’t want to make the quiz longer than 12 questions — or do anything that might suggest that we were suggesting that people could only pursue a certain course if they were staff, or faculty, etc. So when a friend who beta-tested the quiz said that a question about how people self-identified would have been helpful, I simply explained why I couldn’t include it.

I think the quiz worked, in terms of getting some different ideas into people’s heads without putting them in boxes and closing the door — though I know that the term “digital-physicalist” (one of the profiles) caused some confusion. We’ll see what the first quarter’s evals say, when we get them. We also sent our participants the introduction to the most recent issue of the Journal of Digital Humanities; and a single paragraph from the introductory post on Fumblr: the Academic Failblog. While you can learn a lot about digital humanities just by googling, it’s hard to know what to google for if you’re just starting out — and getting lost in the firehose of DH links might be a fun timesink for me — but not so much for others. So — I wanted our group to have a couple of avenues to explore — but not an avalanche.

The last thing that terrified me was the weather report that came out about a week before the first workshop, which said that Seattle’s weird (but rather pleasant) streak of sunny, warm weather would abruptly end in a weekend that would bring 2″-5″ of rain. Would people get out of bed early on a Saturday morning to come to a workshop if it was raining buckets? How much onus was on me to get them to brave the rain? And could I entice them simply by bringing up the excitement of all the great DH stuff they were going to learn? Answers: 1) Maybe. 2) Possibly a lot. 3) Maybe, but I felt doubtful. After all, I’ve seen the following image floating around my various social streams, lately, and not just from my DH colleagues. 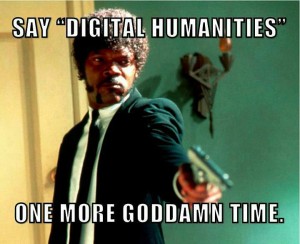 I might love this field. And it might have made my own life and work feel healthier, rather than the reverse. But a lot of people have been alienated, in one way or another.

I remembered that the Simpson Center had a kitchen, with a working oven. And I remembered how good Pillsbury Biscuits tasted, back before I went gluten-free. So I told people in one of the advance teasers that we would have fresh hot biscuits and coffee available. I don’t know that I really thought that the biscuits would be the deciding factor in whether people came to the workshop or not — but I thought that they might help people relax and feel comfortable once they arrived. Sarah brought towels to have available for drying off from the rain for the same reason.

As it happened, the rain wasn’t bad Saturday morning — but we had biscuits, butter, honey, and jam; and I stand by my strategy. Earlier today, I read an article by William Pannapacker in the Chronicle of Higher Ed, titled “It’s Your Duty to be Miserable.” It’s not paywalled, which is lovely, and I recommend it. Pannapacker is looking at the numerous contexts in which academics are conditioned to believe that they ought to be suffering for their work; and arguing that moments of comfort are worth saving, too. He references a scene from The Seventh Seal:

…the scene in which the knight, Antonius Block, finally discovers the purpose of his crusade: He finds something worth saving. “I shall remember this hour of peace … the strawberries, the bowl of milk, your faces in the dusk, Michael asleep, Joseph with his lute. I shall remember our words … and shall bear this memory between my hands as carefully as a bowl of fresh milk. And this will be a sign and a great content.”

How often do such moments occur in the lives of professors?

I could ask how often they occur in the lives of graduate students, but that’s really a different topic. But I think this is important. How much do moments like this — not just nice moments, but moments of comfort, however small (Pillsbury biscuits are hardly the platonic ideal of biscuit) — occur in learning contexts? How much do they matter? I’m not going to argue an answer for that right now — but I intend to keep trying to remember to build such moments in when I’m teaching, and I’m pleased that in the digital humanities, with its habit of borrowing things from programmer culture, people often care about making sure that there are good snacks.

Demystifying Digital Humanities is supported by a grant from the Simpson Center for the Humanities at the University of Washington.

The Simpson Center for the Humanities runs mailing lists for both digital and public humanities news. You can subscribe to either or both of these lists at their main site.